There’s no doubt about it, pitbull puppies are adorable, lovable, maybe some are lickers, and most are definitely chewers.

Chewing is a normal puppy behavior, but if all of your shoes are developing holes that shouldn’t be there and your area rug is gaining some extra tassels, it’s time to do something about your pitbull puppy’s destructive chewing behavior.

Puppies chew to relieve discomfort from teething, explore their world, and decrease boredom. If your pitbull puppy’s chewing has become focused on inappropriate objects you can try offering suitable chew toys, give them plenty of exercise and attention, or interrupt the chewing and divert their attention elsewhere, to name a few suggestions.

Why Do Puppies Chew So Much?

There is no single reason why puppies chew on everything around them. It may be a combination of many things, or different reasons at different times.

To fully understand what makes your puppy chew, let’s look at some possible causes.

The teething timeline is different for every puppy, but most baby teeth will start to be replaced by adult teeth starting at around three to four months of age and usually completing by the time your pup is six months old.

That gives them two to three months of swollen, uncomfortable gums, freshly erupted yet still sore pearly whites, and lots of chewing and drooling in an effort to control and help it all along.

The process of chewing on things, especially firm objects, helps to massage those sore gums and encourage those new teeth to break through the gumline as soon as possible.

Also during this teething time, you may find those teeny tiny baby teeth in your puppy’s food or water bowl, or notice small blood spots there or on things they have been chewing. It’s all part of the process, so no need to be alarmed.

How Long Will a Puppy’s Chewing Last?

The length of time that your pitbull puppy seems like they are a set of teeth with legs will depend on the reason they are chewing in the first place.

If their chewing is due to teething, it could last three to four months. If your puppy is chewing out of exploration, it could last several months, until their comfortable in their surroundings, or have turned their attentions to other hobbies.

If it’s due to something else, like boredom or anxiety, it could last until they’re no longer chronically bored or anxious or until you teach them another coping mechanism.

Some destructive chewing behaviors can follow a puppy into adulthood and beyond.

How to Stop a Puppy From Chewing

Let’s get one thing clear before we start here:  when dealing with a chewing puppy, it’s not about stopping the behavior completely. Rather, it’s about turning it into an appropriate behavior. Puppies need to chew for many reasons, as we already discussed. With the exception of out of hunger, boredom, and anxiety, chewing is a completely normal puppy behavior. It’s something that helps them develop and learn. With that in mind, let’s look at some ways to protect your possessions from those puppy teeth while still allowing them to chew.

Chew toys for pit bull puppies will help satisfy that chewing desire while massaging sore, teething gums, and giving them something to do. Picking out the proper chew toy for your pitbull puppy is about finding something durable, variable, and interesting.

Chew toys can be flavored, dispense treats, be fetchable, and tuggable. Choose some that cater to your puppy’s natural play style.

For example, if your puppy likes to sit and chew, find a toy that they can hold between their forepaws for better control. Also, make sure you choose toys that are safe and can’t be easily destroyed and swallowed.

Pitbull puppies have lots of energy and they need to use it constructively or it may turn into destructive chewing. Make sure you’re giving your pup plenty of time to stretch their legs and expand their minds.

Go for walks, play games, teach them tricks, and just spend time with them. The more time and energy they put into these positive things, the less time they’ll have to shred the newspaper.

With puppies, it’s best to break exercise sessions into short, more frequent periods, if you can. Maybe go for a walk in the morning, play fetch before lunch, do some training after naps, and then another walk before bed.

This will give them some variety, plenty of time for rest and help keep their attention.

When you catch your pitbull pup chewing on something they shouldn’t, interrupt the behavior by taking the object away and then diverting their attention to something else.

This may be a proper chew toy or an activity to help them forget what they were doing when you interrupted them. Don’t punish or scold them for chewing on the wrong thing, but do reward them for turning their attention on something more positive.

If possible, pick up things that you would rather not have in the mouth of your pitbull puppy. Don’t leave socks and shoes within reach and make sure the garbage is secured.

Since you can’t stash away everything, consider confining your puppy to areas of the house that are more indestructible, like a laundry room, when you can’t give them your full attention.

Or you may choose to keep them out of certain rooms, like the kid’s playroom, instead. If you have to, crate training is a way to keep your pitbull puppy safely away from those items you would rather not have chewed while you can’t be with them.

On a similar note, make sure that things that your puppy is allowed to chew on don’t resemble items that are off limits. For example, no shoe shaped chew toys or old socks if you don’t want them raiding your closet.

If your puppy is chewing out of nervousness or anxiety, you may try leaving them a something with your scent. Rub their chew toys in your hands or lay on their bed. That way they can have some of the comfort of you with them while you’re gone.

Some anxious dogs respond well to white noise, such as a radio or fan. Others may do better in a small, dark hidey-hole type space. Talk with your veterinarian for more coping mechanisms if your dog is experiencing extreme anxiety.

Chewing is as normal a puppy behavior as is snuggling and licking your face. Nearly every pup will go through a chewing phase, and that’s ok.

Arm yourself with some of these methods to turn that chewing from a destructive behavior to something positive that helps relieve their teething discomfort and learn about their world.

There’s no one size fits all method to curb your puppy’s chewing, so don’t be afraid to try multiple ways as needed or in combination. 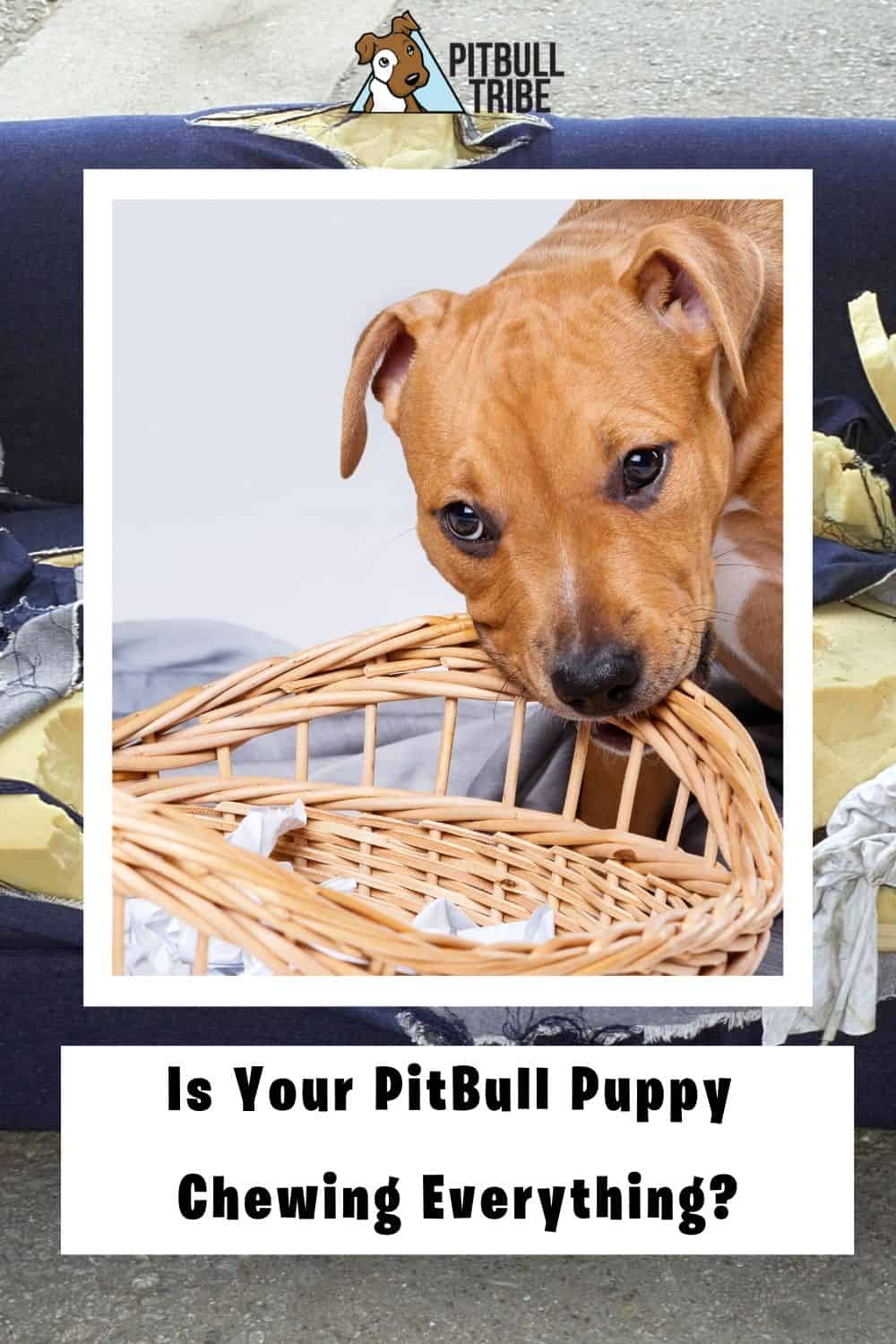