American bullies are loved and feared in equal measure. Pit bull owners such as myself will vouch for the loving and exceptionally giving natures of their bullies, but the fact is the breed can be highly aggressive.

If you’re considering owning a pit bull, there are facts that you should consider.

Are american bullies good with other dogs?

Although your bully may be the sweetest doggie on the block, it’s an unfortunate aspect of this breed that they carry genetics linked to blood sports, such as bull and bear-baiting and dogfighting. American bullies aren’t innately good with other dogs, but educated owners can affect whether their pit bull exhibits these aggressive behaviors. Keep reading.

Poorly-Trained American Bullies Are Not Good With Other Dogs

Despite the highly balanced temperament score, American pit bulls still top the charts on fatal attacks on humans and other dogs. Due to selective breeding for the prolonged use of the breed in dog fighting rings, pit bulls may be highly aggressive to other dogs, companion pets, and domesticated animals.

However, further studies show a direct correlation between vicious pit bulls and owner ignorance, irresponsibility, or even criminal tendencies such as violent behavior. Furthermore, dog bite data may be biased against breeding in that the nature of the pit bull attack causes more significant harm than other even more aggressive breeds.

Despite the potentially slewed statistics, even bully lovers can’t argue that the American pit bull, poorly trained, can do great harm. In fact, certain cities in the U.S. and the province of Ontario in Canada have banned ownership of the breed entirely, and more are likely to follow.

This move to ban the breed is the most saddening state of affairs for proud owners of this courageous and loving dog breed. Surveys have shown that between 19 and 32% of all dog breeds surrendered to shelters are pit bulls, of which a large percentage are euthanized every year.

Irresponsible Owners Can Trigger Aggression in Some Pit Bulls

In a peer-reviewed study, researchers found a direct correlation between high-risk dog breeds such as pit bulls and the behaviors of their owners. The study found pit bull owners statistically more likely to be socially deviant, including behaviors such as:

The aggression encountered in aggression-sensitive breeds such as the pit bull may reflect the deviant nature of the owner rather than endemic to the breed. In these instances, the dog becomes a deviant ‘possession’ much like a loaded unlicensed weapon at no fault to the breed.

Aggression in the Pit Bull Bloodline The ancestor of the American pit bull arose in the British Isles, where breeders combined the bravery of the Old English Terrier (now extinct) and the strength of the Old English Bulldog. Owners predominantly used the breed in bloodsports such as bull-baiting and bear-baiting until animal cruelty activists banned these inhumane sports in 1835.

Unfortunately, those who use the bloodsports as a means of livelihood turned the pit bulls on each other in dog fights that were easier to hide from public scrutiny. These dog fighting rings continued unabated until the breed arrived on America’s shores between 1845 and 1860, where clandestine dog fights continued.

Some argue that the dogs that showed the greatest dog on dog violence were more likely to be favored for breeding, creating a genetic propensity for dog-on-dog aggression. A study showed that pit bull owners reported an extremely high percentage (22%) of dog bites on other dogs, while dogs’ bites on humans were only 2.3% higher than average.

These statistics lend themselves to the fact that breeders selected individual dogs for aggression against other dogs rather than humans. However, there’s speculation that survey takers overrepresent pit bulls in dog aggression and attack fatalities data due to the breed’s nature.

The severity of pit bull attacks is directly related to the strength and tenacity of the breed, where less severe attacks may fall under the radar with similarly aggressive breeds with less savage attack consequences.

In general, American Pit Bulls and pit bulls have a breed-specific method of attack that has far more devastating consequences on the victim than other breeds. The enormous jaw strength combined with a shake and tear method of attack penetrates deep muscles that have sometimes been likened to a shark attack.

DogsBite.org reported over 45 fatal dog attacks in 2020, of which pit bulls claimed 72% of the recorded mortalities, several times higher than any other dog breed. These stats are particularly sobering for pitbull lovers as the total pit bull population only makes up 6.2% of the dog population.

Can I Train My American Bully To Be Good With Other Dogs?

You can train your pit bull to be good with other dogs. Factors that may make your bully aggressive include genetic predisposition, incidents in early puppyhood, and lack of socialization. You should ensure that your dog receives the proper training. As a responsible owner, you should take into account the genetic heritage of the breed and ensure you ameliorate their aggressive tendencies. Some of the ways you can prevent your American bully from becoming a danger to other dogs and animals are the following.

Once your puppy’s vaccinations are up to date, start socializing it early. Many people believe that dog parks are the best start, but I tend to disagree.

A large dog off-leash attacked my pitbull pup, and he became aggressive to other dogs from that moment. I would suggest supervised puppy socialization classes to ensure your bully doesn’t have a bad experience due to irresponsible dog owners.

The more people, dogs, and places you introduce your pup to, the more balanced an adult your pitbull will become. A clinical study showed that early dog socialization created adult dogs that were less aggressive and fearful.

Take Your Bully to Training Classes

Dog training isn’t only building a command system into your canine friends but is also an immeasurable bonding experience. When an owner and their bully understand a common language, the bond only deepens.

Obedience is a dog breed as strong and tenacious as a pit bull is imperative for owners of this breed. An owner may use commands to override certain behaviors in their dog as they arise, increasing their control over potentially harmful behaviors such as dog-on-dog aggression.

Be Patient and Use Positive Reinforcement

Pit bulls are a tough breed and don’t respond well to physical punishment (which shouldn’t be an option in the first place.) The nature of a bully is an eagerness to please his owners, and owners will achieve much better results with positive reinforcement.

Owners can use the treat system to encourage their pit bulls, as every bully owner knows they love their titbits. Studies show that punishment increases the incidence of problem behaviors and not a reduction. The study subjects that frequently punished dogs showed high anxiety levels and concurrent behavioral dysfunction.

Give Your Bully Plenty of Exercise and Stimulation

Pit bulls are a highly energetic breed, and they suffer more than most dog breeds when they are left languishing in solitary confinement. There are various activities to engage with your bully, retrieving, running, agility trials; the list is endless.

Reducing your pit bulls’ pent-up energy goes a long way to making a happy and non-aggressive companion. Pit bulls thrive on human contact and interaction and should be included in the family where possible. I walk my bully once a day and twice when I have the time.

The natural energy of your bully, if not properly channeled, may lead to behavioral problems and anxiety in your dog. A clinical study showed a correlation between frustration in canines without exercise and related behavioral issues, including aggression.

Exercised dogs in the study group showed that canines who regularly exercised had a greater ability to maintain self-control and manage frustration,

Don’t be discouraged if your bully doesn’t get along with other dogs. I’m particularly vigilant with my pit bull and ensure that he’s always leashed and wears a muzzle in public spaces. Aggression isn’t a sentence to life in solitary confinement. However, it’s a call to ensure you always protect other animals from your dog’s potential aggression. 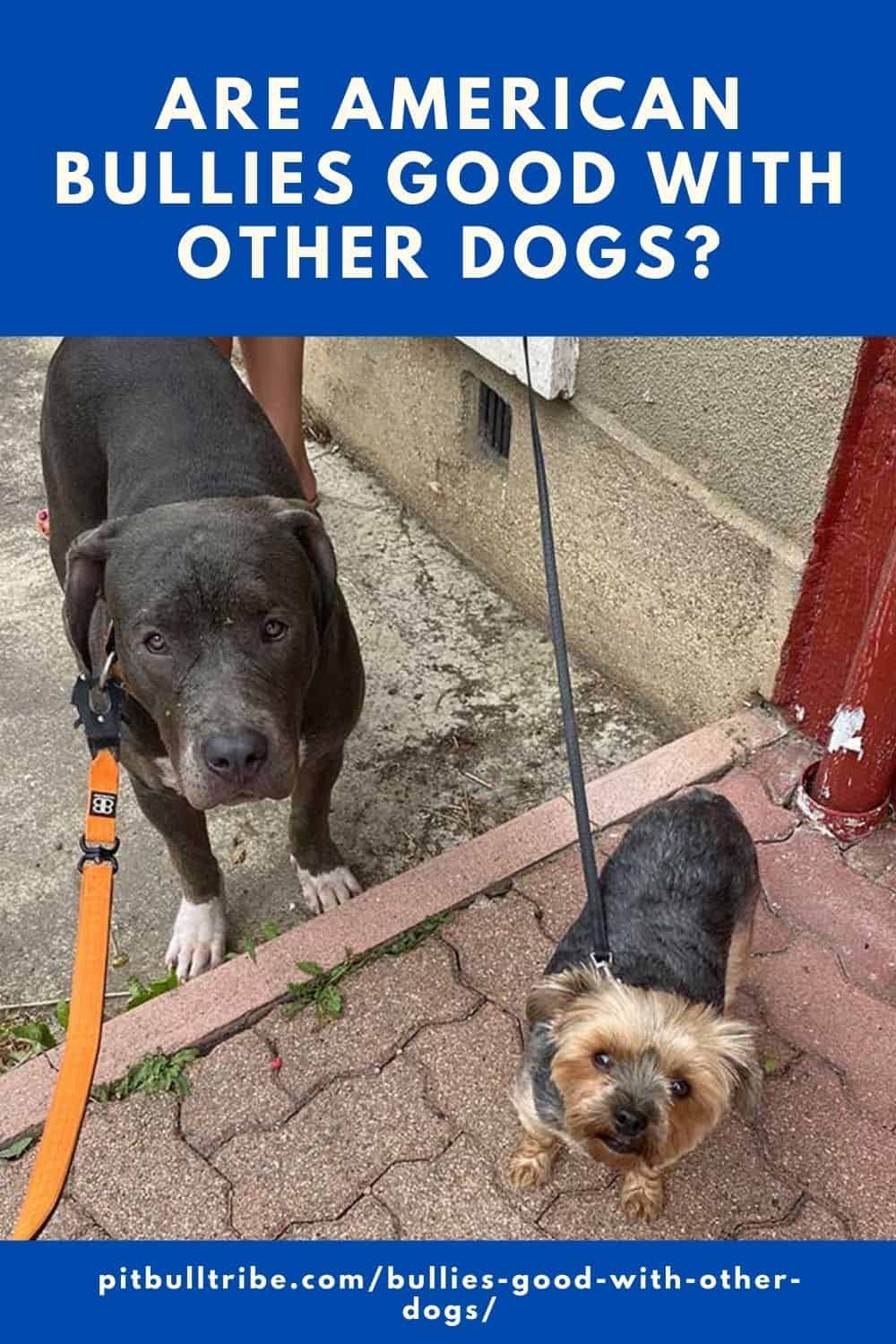